Why Those TV Screens at the Gym Are a Problem—and Why It Matters, Even If You Don’t Work Out

The first time I walked into the gym near my home, I was immediately struck by how many screens I saw:

It’s tempting to see these screens as a perk. After all, you can basically watch anything while you’re working out.

But there’s a problem with this setup.

All of these screens are working against you. They’re keeping you from becoming the Best.

I’ll show you why in this excerpt from my new book: There’s No Plan B for Your A-Game. You’ll find it below.

By the way, this isn’t just about the gym. It’s about something bigger. It’s about how you show up for yourself on a daily basis. 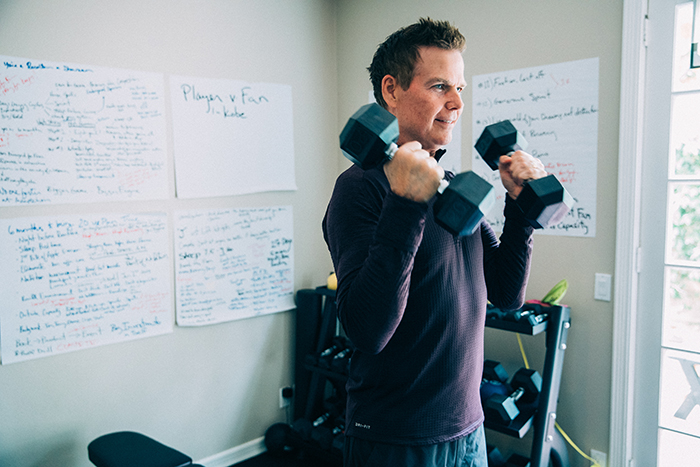 If you can see these TV screens for what they really are, you can use them to make a huge leap toward your dreams.

I’ll explain everything in the excerpt. Let’s get started:

We live in the most distracted time in human history. That probably doesn’t surprise you. Smartphones, computers, tablets, texting, surfing the web, social media, email alerts, everything on demand . . . we’re all more distracted than we were twenty, or even ten, years ago. I feel pretty strongly about staying on course, as you know, and I don’t very often get pulled into the vast hole of time-suck that is the internet. But a few days ago, I was poking around on Facebook, and my phone popped up a text message alert. It took me a moment to realize that I was actually being distracted from my distraction. I course-corrected but got a good laugh at myself.

Distraction surrounds us. I rarely go to regular gyms, but I do have a membership at a nice, new gym close to our home. The first time I walked in there, though, I counted twenty-four big-screen TVs near the treadmills. Big-screen TVs were lined up in front of the stationary bikes, too. And as if that weren’t enough, each of the treadmills and bikes had its own little TV built right into it. That told me that this gym is not really about working out. It’s about distracting yourself long enough to get through a treadmill run or a bike ride.

The best does not do that. The best actually do what they do. If they’re exercising, they focus on exercising, on how their bodies are working, on what muscles are being engaged. They don’t distract themselves with electronics. They’re actually showing up to their practice. How the hell do you practice outside your current capacity if you’re not paying attention? You can’t. A distracted practice session might keep you from losing ground, but it’s not going to make you healthier or move you closer to your declaration. If you’re truly practicing outside your comfort zone, you’re struggling too much to be distracted. It takes maximum effort, and everything else falls away.

I’m not the only one who’s noticed this high level of distraction, of course. Cal Newport, in his book Deep Work, writes, “The ability to perform deep work is becoming increasingly rare at exactly the same time it is becoming increasingly valuable in our economy. As a consequence, the few who cultivate this skill, and then make it the core of their working life, will thrive.”

So you can bemoan the current state of our culture, or you can see it for what it truly is: a huge opportunity. If we live in the most distracted time in human history, let’s take advantage of that. Let’s capitalize on that distracted world. This is a fabulous way to compete. It’s a way to fly in the face of the culture, which you know I encourage. While most of the world is becoming increasingly distracted, texting as they walk and falling off curbs into oncoming traffic, and mistaking electronic blips on a screen for true connection, a select few are capitalizing on this huge cultural shift. That’s us. We’re part of that small group going in the opposite direction of everyone else. They can be as distracted as they want. We’re choosing instead to focus.

The culture we have to go out there and create in is incredibly distracted. We can create our environment to a certain extent. We can eliminate as many distractions as possible. But we cannot take away all distractions. So you have to learn how to dance with some of them.

You know by now that nothing I suggest comes without a lot of work. If you make the choice to focus, it will take concentration and commitment. It is a choice to break the habit of being distracted. The only way to do so is to remember that you are playing a bigger game with a longer-term goal. Unless your dream is a bigger game than the distractions you face every day, you won’t fulfill your declaration. 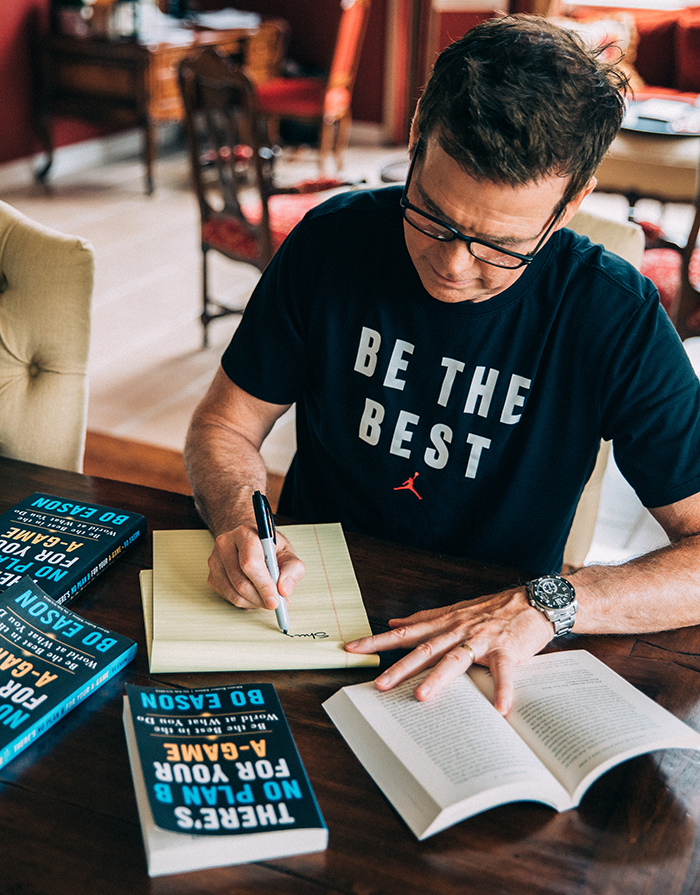 I’ve already discussed how if you build your environment right, you don’t have to lean on your own willpower so much. One of the environment-building things we’ve done for our kids is to limit their access to electronics. We know, for instance, that if Axel has a phone, that thing is going to take over his life. Axel does not have a phone. And we’re not alone in this conviction. Bill and Melinda Gates, for instance, didn’t let their kids have cell phones until they were fourteen years old. Steve Jobs similarly banned his kids from having cell phones when they were young. What do these people who built our current tech-obsessed world know that we don’t? They know that electronics are hugely addictive. They know that they want something different, something better, for their own kids. So they protect their kids.

Who’s protecting your kids from distraction? Who’s protecting you? For your entire family, ask, What are we hearing, how are we being herded, how are we being deliberately manipulated and distracted? And how do we protect from distraction? Protecting your time and your mental state is incredibly important. Let’s say you’re deep in the zone, possibly writing or concentrating closely on something. Now, if someone walks in and asks you a question, it takes you at least fifteen minutes to get back into the zone. That’s not just being interrupted. That’s like throwing a bomb into your ability to reach your goal, again and again, and again.

Another way to be distracted is to be vulnerable to people telling you, “Oh, that’s an impossible goal.” Instead of supporting you in your declaration, they put you down. For many of us, that knocks us off course. That sort of input is a huge distraction and worry. You’re trying to adopt a professional mindset, and they’re coming at you from an amateurish frame of mind. According to Steven Pressfield, “Amateurs play for fun; pros play for keeps.” You’re learning how to be a professional. Don’t be distracted by the amateurs. Don’t give their negativity space in your head. You’ve got a big job in front of you for the next two decades; don’t question your ability, your skill, your commitment, or your drive because someone else can’t believe the way you do.

One of my favorite ways to manage distractions is absolutely backward of what you’d think it would be—so again, going counter to the culture—and you can think of it as an inclusive distraction.

Here’s an example. Let’s say a pro basketball player, Kobe Bryant, maybe, is in a high-pressure situation. He’s at the free-throw line at the end of a game. The game is on the line, there’s one second left, he has two free throws that will win the game, but if he misses the shots, they lose. So here’s how an amateur mind would handle this situation: Okay, I’ve got to completely focus on the basket and on putting the ball in the basket. Everything else is invisible. I’ve got to have tunnel vision. I’ll just focus on the basket, the ball, and me.

That is what we call ultra-presence. That is doing a dance with everything around you and being inclusive of everything around you. And it’s the complete opposite of what amateurs think you should do. Tunnel vision is not the way to go, even if that seems logical or intuitive.

It’s not just in sports, of course. I was on a movie set once, and a big star was in front of the cameras shooting a scene. He definitely didn’t have tunnel vision. There were about a hundred people standing around. So there was the star, waiting for the cameras to start, and he was surrounded by people. Picture it: There was a guy putting makeup on his foot. A woman was fixing his hair. There was somebody messing with his clothes and making sure his shirt collar was just right; there was a soundman; there was a union worker off to the side having a cigarette. They were all around, and the star had to focus on the scene and then deliver. And I saw him take in the whole crazy scene around him, instead of excluding it, and then deliver the scene. That was true freedom. That was a true focus.
Here are the action steps necessary to avoid distractions in your life:

What’s your biggest distraction? Name it below, and tell me how you’re going to eliminate it—and when. (Hint: Today is a great day to start!)

There’s still time to join my exclusive group on Facebook called the A-Lister Team. I’d love you to be a part of it.

Leave us your questions and comments:

Let me know if this is resonating with you! Share, Like and +1 it for me so I can continue serving you and your friends on my mission to help everyone use their story to become the best!

Become a better storyteller in 3 simple steps. Craft your personal story with my foolproof story structure to attract, lead, and inspire your audience.

7 Ways to Play a Bigger Game

Toss out your Plan B today! Learn how to fulfill on your GREATEST Dream by bringing your A-Game EVERY DAY!